Hi there everyone,
I have not blogged often, but let this be my start.
You could see about three things in my blog,
1. GOD
2. Aliens and
3. Science
I believe that all these three things are connected in many ways. Now let me make my readers to understand those connections through my blogs. In this blog I would like to brief about the connections between God and Science.
I could quote that "if the weapon named question is used in places where we do things without reasons then it would probably yield you a logical answer behind those actions", and yes those questions made me to explore the following things. For example, we all have  a common habit of going to spiritual places in order to see the God, despite of the belief that God is everywhere".  Now introducing our weapon (question) here would definitely yield an answer. God may be everywhere as all of us believe, but why did our ancestors establish various spiritual  places? The answer to this question took me into an interesting regime of facts that our ancestors had devised long before. And those facts are being discovered by the present civilizations under the hood called Science. Every temple in India has been built at locations rendered by the constellation of stars and the astronomical reasons behind them. you might have noticed that there will be a set of cone like structures (Khumbas) on every temple tower. these are not mere structures, those are devices which has the capability of absorbing the ultimate energy called COSMIC* energy from the space. The idols of God even has a purpose, as They are placed directly under the Khumbas, the cosmic energy absorbed by them is transmitted to the idols and these Idols have the power of storing them for a long period of time with minimum dissipation rate.
And the reason behind us visiting the spiritual places is to gain that ultimate energy from the God. As the Cosmic energy is considered to be the authentic source of all beings, every life on earth needs it mandatorily. The energy such received can assist a lively being to build up positive mind power which in return can give the power of cleansing the physical and mental defects. This is otherwise defined in religious aspects as the act of receiving blessings from God that also has the same advantages as told before. Thus the reasons of many such acts are given a disguise in the name of GOD by our ancestors to attract the beings to make use of them.
To be continued in next blog with more interesting facts.

COSMIC Radiation (courtesy- wikipedia):
Cosmic background radiation is well explained as radiation left over from an early stage in the development of the universe, and its discovery is considered a landmark test of the Big Bang model of the universe. When the universe was young, before the formation of stars and planets, it was denser, much hotter, and filled with a uniform glow from a white-hot fog of hydrogen plasma. As the universe expanded, both the plasma and the radiation filling it grew cooler. When the universe cooled enough, protons and electrons combined to form neutral atoms. These atoms could no longer absorb the thermal radiation, and so the universe became transparent instead of being an opaque fog. Cosmologists refer to the time period when neutral atoms first formed as the recombination epoch, and the event shortly afterwards when photons started to travel freely through space rather than constantly being scattered by electrons and protons in plasma is referred to as photon decoupling. The photons that existed at the time of photon decoupling have been propagating ever since, though growing fainter and less energetic, since the expansion of space causes their wavelength to increase over time (and wavelength is inversely proportional to energy according to Planck's relation). This is the source of the alternative term relic radiation. The surface of last scattering refers to the set of points in space at the right distance from us so that we are now receiving photons originally emitted from those points at the time of photon decoupling.

I hope that you had got some basic ideas about the relationship between God and Science. Now it's time for us to go a little deep into rituals done for the idols and their needs.
One may wonder why our Gods (idols) are being washed or made to take bath, dressed, and given a make-up every day. (Muruga am sorry) I don't want to get punished by God for describing in such an obvious manner. So let me go Spiritual, "Why are Gods subjected to sacred bath (ABHISHEKAM) in a routine?" The answer lies within ourselves. We take bath to get ourselves fresh and the same is applied here, but with some added advantages. As told in the previous blog, the idols are used to store the cosmic energy and dissipate them. We know that energy transfer occurs only when there is a potential difference exists. Here in this case the idols are the high potential dissipaters and we(humans) are the low potential absorbers. The amount of energy an idol can store in them varies with respect to the size of the idol. (Sorry that I couldn't give the exact mathematical expression between the size and the storage capacity of an idol.) Hence if the number of absorbers increases, the amount of energy lost by the idols will also increase. We know that the average count of people visiting a temple is maybe 1000/day. And as the count is pretty high the idol is pushed to its limits of transferring capacity by continuously getting energy from the Khumbam and supplying it to the devotees visiting the temple. This phenomenon would eventually make God become powerless within a day. To be scientific, the composition of the idols would lose the capability of storing the cosmic energy within itself.
In order to replenish the power of God, the idols are subjected to the ritual called Abhishekam.
This is a ritual in which the idols are made to take a sacred bath not only with water but also with Vibhuti, honey, milk, turmeric, etc 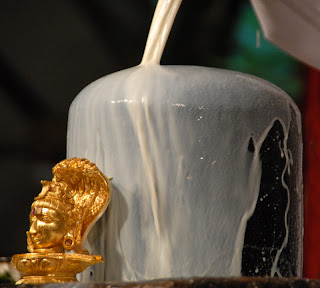 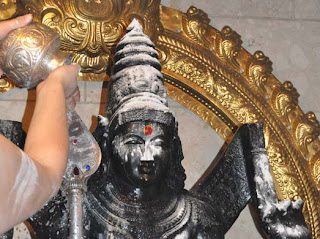 After the Abhishekam(Holy Bath) is done, the composition of idols gets prone to the radiation again. And since they had been replenished with rich ingredients, the capabilities of God get restored. Thereby our God starts blessing the devotees again.
A similar bath is done to the idols present in our home also. But we usually don't do it daily. That's because the idols present in our home have only a few numbers of devotees. (fewer absorbents and hence less loss of energy )


Usually, after the Abhishekam is done, the spent liquid is passed on to the devotees for them to drink or to apply to their heads. Since the liquid is made to flow over the statues, it is believed to have the energy collected by them. And making use of that liquid(locally called TEERTHAM) may certainly have some good effects on us. There is no exception in other religions too that they use such holy liquids(usually kept in the main shrine for a long period of time) to heal diseased beings. This procedure is by par used in Islam and Christianity also. They follow the practice of supplying the holy water to their devotees to cure diseases and Sins. 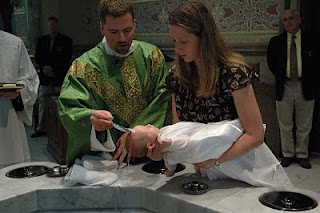 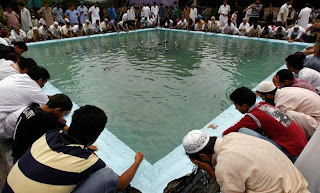